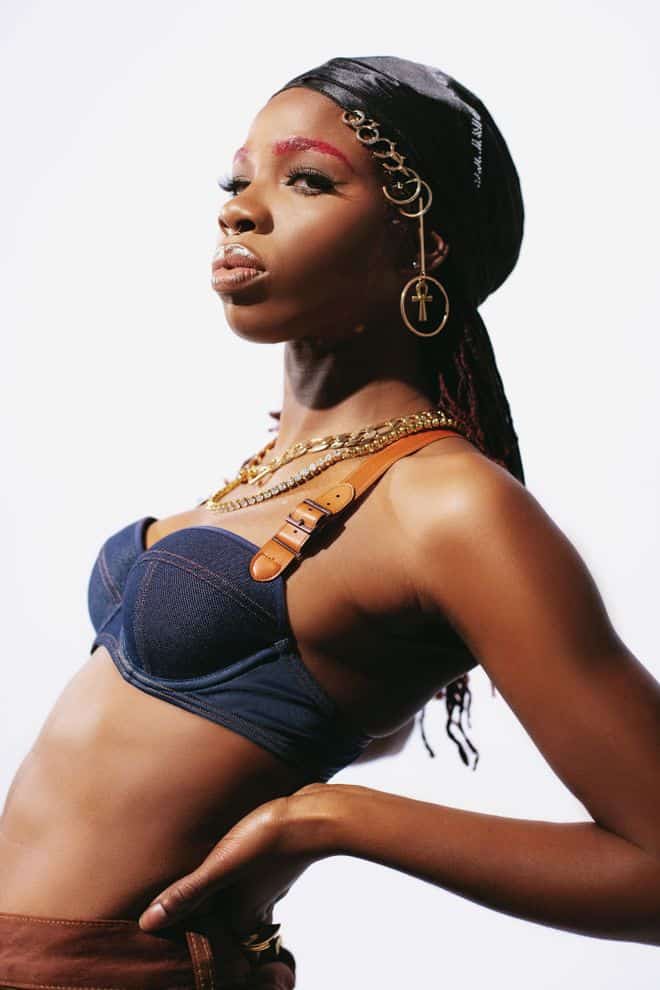 It is said that the name you gift your newborn lays the first few bricks of the foundation that forms who they are. Old wives tales don’t usually stick these days, but Haviah Mighty is everything her birth name encapsulates her to be; powerful, influential, and prodigious.

Growing up in Toronto and then Brampton, Canada, two socially unalike areas, as well as being brought up with Jamaican and Bajan heritage, Haviah’s background has allowed her to curate a music career that tells stories of the past, present, and future, touching on an array of socially important topics. Her music speaks volumes to those wanting change.

This week alone has been a special moment for Haviah after winning the Prism prize for her influential and captivating video for the single ‘Thirteen’. The video directed by Theo Kapodistrias was selected by a jury of around 130 media professionals.

The imperative video touches on the history of racism and oppression as Haviah Mighty raps about the 13th amendment, which abolished slavery in the USA. The video displays the importance and attention to detail of each creative aspect surrounding music, that is also able to stand alone and illustrate inform. Haviah’s words hold power, she is someone that you could talk about for ages and always learn something new.

This year has allowed many people to reflect on the work they have done so far, how would you describe your journey for UK readers just discovering you?

I’m a multifaceted artist that has a lot to say, a lot to show, a lot to share. Its been many years of fine-tuning my rap and song writing skills on different styles of production. There’s so much more in the vault!

I read on your website that the pandemic has obviously slowed you down, but from my perspective, I’ve been seeing you make waves globally and consistently this past year. Has this time been an opportunity for you to explore yourself musically in a way you have not done before?

Oh wow, thank you so much – yeah, I think when show opportunities and travelling ceased to exist, it left a lot of time to create more new music. I also think I had a lot of momentum when the pandemic hit, so I was being considered for some behind-the-scenes opportunities that kept my name floating around and kept me on my toes. From writing & singing the soundtrack to a DoorDash commercial or producing the instrumental cover track in a Holt Renfrew ad campaign, etc, I had the chance to do more than just put my voice on my music. It’s been a fun challenge to see how far I can push myself!

Your mixtape ‘Stock Exchange’ is coming out this autumn. Since 2017 you have released a full project every two years, is thi timeframe done on purpose?

Yeah, Stock Exchange is currently rolling out, with all these singles – and will be complete/available this fall. I don’t have a specific timeframe on when to release music or not, so I’d say it’s a bit of a coincidence that there’s a pattern there. But in terms of the process, it’s just considering all angles: artwork, when to release, presave, promo angles, playlisting, etc. And ideally, those things are thought of and discussed the way in advance of release.

You are no stranger to UK artists! Recently collaborating with Yizzy for your track ‘Protest’, how did you both cross paths and why did you think this was the perfect fit for this powerful track?

That’s great to hear! We collaborated on ‘Protest’ because I reached out and felt he would be a great addition to the song, narrative-wise and audibly, too. He’s got a great rap flow and a dope singing voice. He was into the song when we sent it, and the synergy can be felt as if we were in the studio together. He killed it!

The single has received so much praise for keeping the 2020 BLM protests alive. It was written in the midst of the protests, was it difficult to create this single and revisit it as you knew it would resonate with so many people?

I wouldn’t say it was difficult – I’m familiar with writing about uncomfortable themes in this manner. I think knowing a song like this is still necessary, is painful to think about. Because it’s just to further communicate, as protests already do, that important discussions need to be had. I reflect on the tensions between law enforcement and the black community and how we are mentally plagued by this gap; making it difficult to function without fear and paranoia – but protesting has made so many of us aware of different things we otherwise wouldn’t have known. I’m here for the difficult conversations – without them, how can change ensue?

You have always touched on subjects that other artists are not necessarily “brave” enough or want to do, like the song ‘Thirteen’, alongside ‘Protest’, what is your thought process when releasing such powerful singles?

It’s just me. I want to have those conversations. It’s natural for me to put something I’m passionate about into my music. Amazingly, others find it brave, but I’m familiar with discomfort as a dark skin black female Canadian rapper. It’s more uncomfortable for me, now, to not speak to these themes, when I live them daily!

You said that you now understand the meaning of Canada Day, as well as being proactive in the police and BLM protests and making injustices towards groups like the Indigenous People of Canada known to your listeners, you are not just a musician. How would you like your career to project within music and outside of it?

I just want to stand for something! I don’t want to lose my integrity, or sense of self, by pivoting away from human rights interests. Though I don’t consider myself an activist per se, it’s just me being genuine to what I find important. I’d like for my career to project that energy, in the music and outside of it. Let’s turn up, let’s have fun, let’s party… but let’s also talk about some things that could hopefully change the world. That’s the balance I’m trying to find!

I feel like Toronto and London, somewhat go hand-in-hand, the music world kind of runs at the same pace. Growing up in Toronto and then Brampton, what sort of influences did you have that paved the way toward your music career, music, and non-musically?

Family. All my sisters sing – Omega Mighty is currently releasing her own music and you can hear the ways we inspire each other. Lauryn Hill, when I was young. The legends/greats like Nas, Jay-Z, Tupac, Big, Eve, Lil Kim… the newer artists in the early 2000’s, like Nelly and 50 Cent… the incredible undercut artists like Rapsody… our Canadian legends like Maestro, Michie Mee, etc. Lots of inspiration. My little brother is now a solid producer. My oldest sister is a piano teacher. My other sister writes her own records. I’m surrounded by musical innovation. Anybody, succeeding in anything, is a non-musical source of inspiration for me. I’m easily charged up by seeing other people achieve their dreams!

The visuals of each music video, from the styling, camera angles, and creative direction are INSANE, I feel like they unlock a different side to you to your audience that can’t be done through just audio. How much hand do you have in your creative direction and how important would you say these aspects are in reflecting who you are?

Thanks! I’m very involved in all the processes of this journey! I think it’s important for me to speak to who I am visually, audibly, etc. to really convey the right message. I agree that exposing different sides of myself in different ways feels like unlocking myself. To the viewer or listener, but also to myself! But yes, I have a heavy hand in the creative direction of the videos/photoshoots/artwork we produce or create!

You started in a hip-hop group Sorority, thinking of the above answer, how does it compare to being solo versus in a group?

I started way before the Sorority – I’d been releasing music since 2009. In 2016, the Sorority became a crew off the strength of an amazing cypher all the emcees participated in. I was actively grinding out my solo career, and being in the Sorority since the end of 2016, as were the other artists! But going from being a solo artist to being in a group, meant different priorities had to be considered. My calendar was also STACKED all the time. In addition to this, I was working full time. It was really a lot! But performing is different – you can feed off your bandmate’s energy, take breaks and create bigger movements vs. performing alone. In the studio, the song can’t be extracted only from your head, rather, the idea needs to resonate with all bandmates. Lots of differences. I learned a lot, functioning in that dynamic.

You say that your family saved you, how important is having a support system to you from the very early days to today?

VERY IMPORTANT! I see, in other musicians and creatives, what not having a support system can do to you. It’s extremely important and I can’t stress that enough. If those closest to you do not support you, love you, and respect you, that will surely break you.

If we were to look at your recently played on Spotify right now, what would we find?

What other artists would you like to work with from the UK?

Got my eye on a few! Kojey Radical is dope! Jords. Enny. Pa Salieu. Many others.

I am a big believer in reflection, reflecting on the young girl back in Toronto/Brampton with dreams of becoming an artist, what would she say to Haviah Mighty today?

I’d say “don’t stress Haviah… self-confidence is the key.” Believing in yourself is the key. Soaking in the knowledge, learning the ‘rules’, and then manipulating them to serve you creatively – that’s the key. And somehow, I think young me knew that. That’s a part of why I’m here. I was patient enough to continue to create, even without the flowers and recognition. Anything is possible.

What is one goal you are setting your eye on this year?

Making my live show more electric! People are in dire need to VIBE OUT and they’re going to want to let loose at these shows, and I’d like to give them an unforgettable experience. I haven’t performed in front of a crowd in a very long time, so I’ll have to build that stamina back up, perform all-new music, and curate it in such a way that people are buzzing with excitement when I leave the stage.