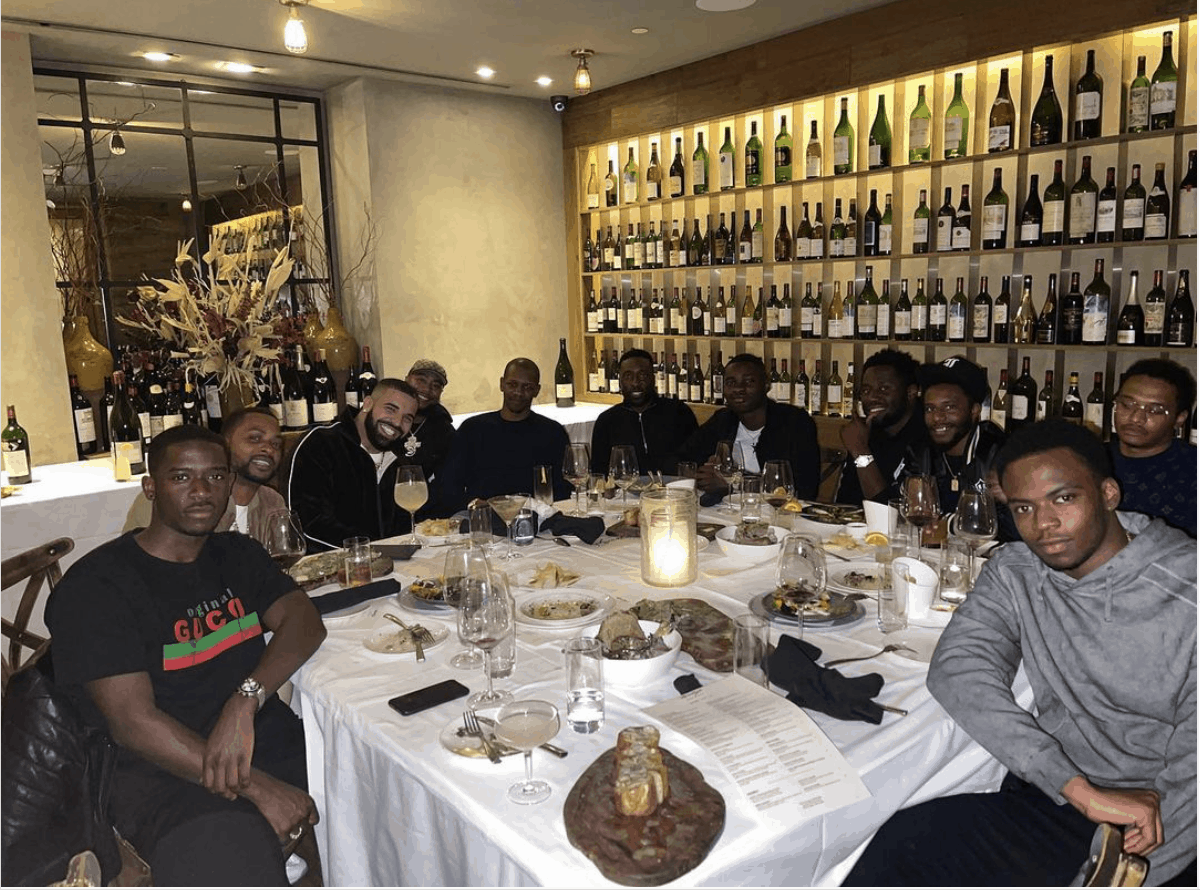 “London gave me so much energy, I wanna do it again” is what Drake told DJ and Presenter Tim Westwood, after touring the UK in 2011.

Drake’s love for British artists and our music isn’t anything new, it’s clear he has admired our energy from the very beginning of his career.  While speaking to the crowd at his then tour, Drake even went on to say, “I need to buy a place, find my wife and move to London.”

Drake has yet to make his big move to the UK, but he’s been a man of his word regarding his passion for London. The 34-year-old Canadian born rapper has collaborated with numerous British musicians; Dave, Jorja Smith, Skepta and Giggs, to name a few.

During an interview in 2012, Drake mentioned that a handful of songs on his album ‘Take Care’ had been heavily influenced by Brixton born rapper Sneakbo, again, expressing his love for British artists whilst giving credit where it’s due.

Throughout Drake’s career, many have doubted and questioned his authenticity, deeming his love for the UK fake. Personally, I believe the relationship between Drake and the British music scene began when himself and Skepta became acquainted. Let’s rewind back to the days of Vine (Dear Millennials, Vine was basically the blueprint for Tik Tok) where Drizzy posted a vine of himself attempting to speak some UK slang: “Man’s never been in a marquee when it’s Shutdown eh? Trust me, Daddy!”

After being featured on Shutdown, Skepta was brought out by Drake at Wireless Festival during 2015. The “Trust me, Daddy” soundbite was later used in the intro in Skepta’s hit Shutdown, taken from his fourth studio album ‘Konnichiwa’ which was awarded a Mercury Prize in 2016. That was the first of many collaborations, as Drake and Skepta teamed up once more to feature on the remix of Wizkid’s Ojulegeba, which was a Soundcloud sensation as it was a linked Canadian, Nigerian, and British talent all on one track. To further show his allegiance with the UK, Drake even went as far as getting ‘BBK’ (Boy Better Know) tattooed to his shoulder, Skepta’s record label.

To top off his solidarity, Drake went beyond bringing Skepta out during his own performances, he came out as a surprise guest during a Section Boyz performance in 2016. At this point it is blatant where Drake’s loyalty lies.

‘Summer Sixteen‘ was so memorable for Drake that he made a song about it. He released one of the biggest singles of that summer; ‘One Dance’ ft. Wizkid & Kyla which ended up being his first US Billboard No 1 single. ‘One Dance’ is truly iconic solely based on the fact it samples a UK classic Funky House track ‘Do You Mind’, by British singer Kyla, remixed by Crazy Cousins.

Also in 2016, Drake chose to team up with one of the coldest lyricists in the UK, Dave. The Streatham born rapper was early in his career when he released his single ‘Wanna Know’, which had already received quite a lot of attention. But fans were in for a shock when Drake decided to drop a remix to Wanna Know, after discovering Dave via YouTube. ‘Wanna Know’ was premiered via his own record label OVO Sound Radio and made it into the Top Rap Song charts, giving Dave some major global exposure.

Many say Drake is obsessed with the UK, but I don’t think that’s the case. British artists often go to America to “make it”, but Drake has continuously gone out of his way to show love for British artists he believes should be recognised for their talents. His influence has even resulted in a rise in record sales and an increase in global success for a lot of the artists he has supported.

If you are a Drake fan, you knew Drake was not going to stop there. Drake surprised fans in 2017 with ‘More Life’, his personal ode to the UK. He had tracks with titles like ‘Gyalchester’ which refers to a London slang term for girls and to northern city Manchester. Although some may say it was used in the wrong context, ‘Blem’, where Drizzy makes a further attempt to show his love for UK slang.

Not forgetting ‘Jorja’s interlude’ which samples one of his previous songs ‘Doing it Wrong features West Midlands songstress Jorja Smith on the Refrain, followed by ‘Get it Together’ also featuring Jorja. Like Dave, Jorja Smith was also early in her career, so this collaboration definitely helped to put her on the map globally. London based singer, Sampha, seems as though he has a pretty good relationship with American artists. Aside from Drake on ‘4422’, he has also worked with Kanye and Solange.

Finally, Drake joined forces with none other than Hollowman aka Giggs on ‘No Long Talk’ and ‘KMT’. In an interview with DJ Semtex, Drake said he met Giggs through British singer Shola Ama, implying that he has more connections with UK artists that we are unaware about. Drake is no stranger to a hit or a song that is accompanied by a dance routine, the single ‘KMT’ was taken to another level as it became a mosh pit anthem for fans in clubs and festivals. Skepta also made a cameo on ‘More Life’ as featured on ‘Skepta’s Interlude’.

He may not have bought a house yet, but Drake did invest in central London. In 2017, Drake opened a boutique OVO store in Soho, following the success of his overseas stores in Toronto, LA, and New York.

I guess after featuring or collaborating with so many UK artists, Drake thought he may as well get involved in UK Television and no, he was not trying to dust off his acting skills from his days in Degrassi. In 2017, Drake announced himself as an executive producer for TOPBOY as it was dropped by Channel 4. Initially himself and Skepta were going to have a role in the crime drama, but later decided to ditch the idea of acting and revive the whole show by pitching it to Netflix. In 2019, the new series premiered on Netflix under the new name TOPBOY: Summerhouse. We also saw Dave take on his first acting role as ‘Modie’ and he killed it.

Drake jumped on one of the UK’s biggest platforms Link Up TV to do a Behind Barz freestyle and used quite a bit of our lingo, including Headie’s famous “shhhh”. At this point he should have just applied for a British passport.

Fast forward to present day, amidst the pandemic North London rapper Headie One and Drake teamed up for what could be the first of many collaborations. Drake began the ‘Only You’ freestyle with “Yo Chubbs might jam next youth for a chain and give it to a sweet one, call that Maya Jama”, blazingly letting us know that he’s into our women too. Drake’s lyrics and flow on this was purposely influenced by the UK.

It seems as though artists are making the most of travelling whilst restrictions are slightly easing off around the world. Earlier this year, a surprising image surfaced on social media. Drake was photographed at dinner in Beverly Hills with the D.S.S. (Dark Skinned Society); British rappers Dave, Giggs and Not3s, as well as British actors Damson Idris and Daniel Kaluuya. He captioned it “You know that’s the Hideaway” referring to London as his place of retreat, which he also references in his recent feature on Young Thug & Gunna’s song ‘Solid’.

Speaking of restrictions easing, 2021 is currently giving me summer 2018 vibes where the sun was shining, the Euro’s were on and Love Island had just started. To set the scene a little more, Drake was performing at Finsbury Park’s infamous Wireless Festival. England were playing against Croatia that year and while on stage, Drake very proudly shouted “Come on England”, while showcasing his best English accent. Fast forward to the present day and it’s safe say Drake may have been onto something, as England could actually be bringing the football home, who knows it could be thanks to Drizzy.

I don’t believe UK artists have ever needed Drake to help them blow, as most artists had already established themselves within the UK music scene. If they were early in their career like Jorja and Dave, it could be said he helped to fast-forward their visibiity at that point in time, as they were exposed to a wider audience.

When any two artists collaborate, they both expose each other to their respective fan bases. Take Headie One for example, he was already peaking, but when the two collaborated on the ‘Only You’ Freestyle, if anything it was a beneficial move for both artists. Drake got to showcase his versatility on drill and Headie got more worldwide coverage as an artist. Other artist like Giggs, Skepta and Sampha, America had already heard about them prior to them encountering Drizzy, even though he may have attracted more of an audience.

Above all, Drake is showing a genuine interest for UK talent, we should respect that.

Click the link below to listen to our latest Cloud 9 frestyle!