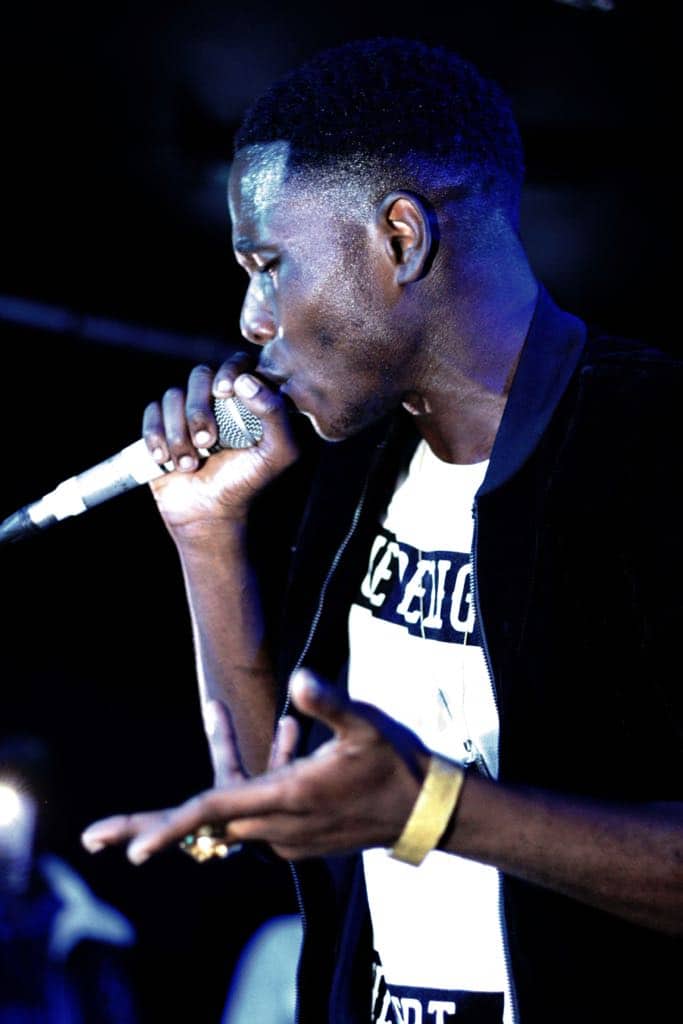 #UnderTheSpotlight an event by Spotlight First that does exactly what it says on the tin.

Their first event shone an intense beam of light on Wooly’s finest, Suspect OTB. If you were there, you were lucky enough to witness one of the first live performances of FBG (Flamboyant Gangster), one of the best UK rap anthems to date. If you weren’t, you were at least curious to see what other sick artists you’d get to know about at their next show.

Ree, our wonderful host for the night was full of life and her bubbly personality radiated throughout the show. She started with one of the best ice-breakers yet –

If you are from East London shout “ahhn ahhnahnn”, or “it’s a warning”.

It was comical that she gave the crowd a choice, just incase we had a preference. For North London, it was “Liar, Liar, Liar”, West London was “I’m just in my zone” and for South, the best one liner of 2017, “BATMAN, DUNANANA.” Hold tight you if you just sang those catch phrases to yourself.

Madz was first up. He kept us engaged with such powerful eye contact that you thought there was no one else in the room. His sound was a slow, well controlled flow that had your head involuntarily bopping to both the on and off beat.

Check out his song ‘Smile for me’ below

Confidence oozed from TeeTheSinger, an attractive femme fatale who had the aura and stage presence of a boss. Her rap-like singing performed on Trap Soul beats instantly reminded us of the likes of Bryson Tiller and Erykah Badu. She must be applauded for her song writing skills, some lyrics would make great Instagram captions. Attesting to how great her sauce is, she signed off:

“that’s why your man would be wanting it.”

You would be forgiven for thinking the next act, 3 lads in multicolored waterproof jackets (one with yellow sunglasses) were a 90’s rap group inspired by DJ Jazzy Jeff & The Fresh Prince of Belair. How wrong would you have been… SMF (Stupid Mad Fresh) were a crazy, vibrant, and energetic group who reinforced that appearance is an important factor when delivering an epic performance. With contrasting flows and a1 adlibs, SMF effortlessly switched from Trap, to Grime, to Drill and back. This was aided by DJ Teeshow’s melodramatic mixing which matched the vehemence of the group and got the crowd going.

“The Feds want me back in jail but I said bun that, I’ll come back in visiting hours”. It made so much sense for Capa to be the next act. Looking at his entourage alone, you already knew what time it was. He kept the atmosphere at the same height solely through his lyrics, heart-felt bars from an undoubtedly talented, yet highly underrated rapper. Stay tuned to 9bills for more from Capa.

Dj Fitz got the memo… spinning the hottest tracks in the UK charts, and otherwise, making the interval fun and enjoyable.

The next act, Adejosh noni *Yoruba voice* altered the vibe from gun fingers to afro-swi… AFROBEATS. He had everyone dancing as he set pace with his charisma and African inspired dance moves. He dropped an exclusive called ‘Money Bounce’ which he made for all the money makers, but his catchy melodies and exciting harmonies meant that you were singing along, even if your current account was in minus. Adejosh treated us to special guests, Jabz, who complemented the Nigerian sound with his verse. He also brought out an impressive 14-year-old Mulla, who we definitely cannot wait to see develop as an artist. Another one to keep an eye out for on 9bills.co.uk.

Last but furthest from the least, One Acen had the front row behind him before he even touched the mic. The crowd knew every banger he had to offer, in particular, ‘Rolling’, featuring Hardy Caprio himself who came to support live in the flesh. Also, ‘Pattern’, which rightfully brought the successful night to a close. Additionally, Acen gave us a preview of an unreleased track…

Also known for his hilarious dance moves, One Acen backed off his shirt and entertained the crowd with a couple whines and milly rocks, embracing his inner rock star. You can find him on all socials, including Piczo, Bebo and MySpace (Sorry- private joke, if you were there you would get it – maybe next time 😉 ).

It is evident that SpotlightFirst are here to stay and will continue putting the spotlight on good home-grown talent. Who should be #UnderTheSpotlight next?