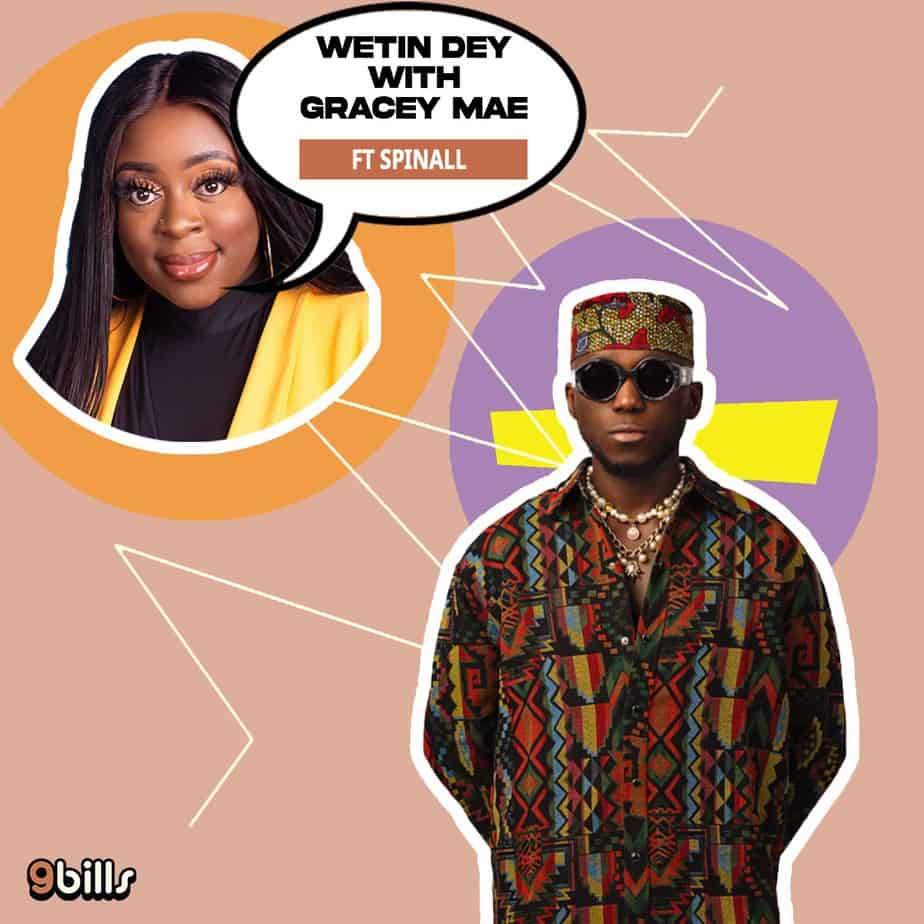 Spinall is a multiple award-winning DJ, record producer, song-writer, label owner and one of Africa’s most successful and celebrated Disc Jockeys. As a pioneer with almost 20 years in the game, he has made classics with Afrobeat’s elites such as Wizkid, Davido, Burna Boy and Tiwa Savage. In the run up to his largest headline show in London at the Indigo2, Spinall sits down with 9 Bills Contributing Music Columnist, Gracey Mae, for a cheeky chit-chat. He talks about taking Afrobeats to the global stage with features from Sean Paul, performances at Glastonbury and being a voting member of the Grammy’s. Plus we delve into the hardest role of his life – becoming a father!

I am great! Now, I’ve just addressed you as ‘Spinall’ because you’ve recently dropped the ‘DJ’ from your name, wagwan?

[Laughs] Well, you know, I’m still DJ. I’m working! I’m always gonna DJ but I felt like the [title] DJ was putting me in a box that I’ve outgrown. I’m producing, I’m writing songs, running labels, I’m doing a whole lot of other things. I don’t want people having the impression that, that’s all I do. The teams advised that we take it out, and it’s fine. It’s still the same guy, init. Actually, I prefer people calling me just ‘Spinall’ to be honest. People that are close to me, they’ve never called me ‘DJ Spinall’.

I love your evolution and growth. On the topic of diversifying, are we going to hear your vocals on a track anytime soon?

My own voice? [laughs] Well, my voice has always been on my tracks, it’s just a lot of people don’t notice. When we shoot the videos, we try not to put a camera on my face during my part. Most of my records have my voice on it. A lot of people don’t even know that my voice was in ‘Energy’. A lot of people didn’t know my voice was in ‘Nowo’. Basically, in most of my songs, I’m humming something or backing up the hooks or whatever. But if you’re expecting me to do a full record without nobody else, I’m not sure you’d be the ones to hear that. That’s for reps, for artists, for songwritings skills… Not for published records. In fact, most of the songs that I’ve released, have my original version with my vocals. You know, the songwriter’s version. The singing part, we’ll leave that to Jesus.

I’m gonna go on your harddrive and just leak all the demos [laughs]. Making music in this last year has been absolutely incredible for you, especially when it comes to international features. Tell us about hooking up with Sean Paul…

Sean Paul had a record that was doing quite well at the time and the label reached out to us. They wanted me to make an Afro-remix and it’s been amazing. He’s been an amazing guy himself. I’ve met his team as well. After I did my part, I then invited Tiwa [Savage] to join the party as well, and she killed it. That was actually fresh because I got to understand how he works and a few other things in regards to the music from that side of the world.

Talking about collabs from that side of the world, can we give it up for ‘Everytime’ with Kranium?! Were you guys friends before or was that another label link up?

No, we’re friends. Myself and Kranium met for the first time in New York. Then we later met at a show that we both headlined in Uganda. The friendship just grew from there. So, we linked up in London and we made that amazing record man. One of my personal favourites.

Mine too. I love the London link up effect. Do we have any UK features coming out anytime soon?

You know me, when the music is out, the music is out. No pressure. I always say whether UK, Uganda, America… I’m just all about the music, not territories or locations or whatnot. If the music is right, and I trust my ears, once it’s good to go and then it will definitely be out. I’ve been in the studio with a lot of people. It’s been interesting! It’s been three years since I’ve been back here [in London] so the studio sessions have piled up so I’m excited. New Energy been in the studio with some of my favourite producers as well. Let’s see!

You’ve been showing the UK mad love for a minute so that’s no surprise. In the last 18 months, you’ve done tracks with Kojo Funds and Shaybo…

My bad! Sticking with the UK, 26 you headlined your biggest British show at the Indigo2, right?

Iconic venue! It was exciting. To be honest, I’ve been doing this for a minute and each event I’m doing like this, just excites me in different ways. All I ever wanted was to make amazing music and to party with people I genuinely care about, which are my fans. To becoming to do this after a long time, just excites me a lot. I made sure I didn’t wear anything difficult to dance! I brought the whole Lagos ‘Party Of Your Dreams’ experience and a few extra surprises.

I was front line and centre!! You’ve said you’ve been doing for a minute but you’ve been in the game for over 10 years! Your first album dropped in 2015 and it was called ‘My Story‘. What would you say has been the highlight of your story/journey so far?

You’re not going to skrimp on the details of some of those amazing moments in your career. Let’s talk about Glastonbury.

Ah, Glastonbury Festival was probably the biggest festival that I have ever performed at. You’re seeing people from different races, different countries, tribes and whatnot. If there’s one festival I would love to go over and over again, it will definitely be Glastonbury.

Since we’re talking about great things that you have achieved, congrats on being a member of The Recording Academy aka the Grammys!

Oh, wow. That’s amazing as well. I think we got an email from the Grammys and they wanted us to contribute. I’m proud because I feel like our music is so important to the world right now. It will be important to point [the Grammys] into the right direction for where to look for artists and music. Myself and a few other amazing artists, talents and producers are on there as Grammy members.

Yes! You’re there. Niniola is there. Afro B is there. Juls is there. Bankulli is there. We’re happy to see the representation. Now, those have been some amazing career highlights. Let’s talk about a more personal one! In the last year, you have become a daddy, how has fatherhood changed you?

It’s probably the hardest job I’ve ever had. Being a dad is something I’m not sure I understand what I’m doing but I’m doing my best. I love him dearly – he is the best thing that’s ever happened to me. Probably my biggest achievement to date. Everything is happening so fast with being a dad and every time I think I’ve mastered a certain aspect of looking after someone else, then I’m facing a new one and a new one. I feel like I’m the son and the kid is my dad but it’s exciting. I feel like there’s more empathy and understanding of a few things that you will think you know. Until you have a kid, you have a way different type of understanding that I can’t even put into words right now. I’m grateful that myself and my partner we’re making it work and it’s been nothing but enlightening and beautiful and full of so much emotions. There’s no words to describe being a dad. Before this call, I just got off the phone with him and he was trying to tell me what has been happening back home in his own language. Well, you know, we both understand what he’s saying. So it’s been beautiful I can’t even lie and I can’t wait to see him here.

Any final messages to our readers?

Just do good and be patient. Keep a clean heart towards everyone. You cannot give what you don’t have! So just look after yourself and be nice to other people.