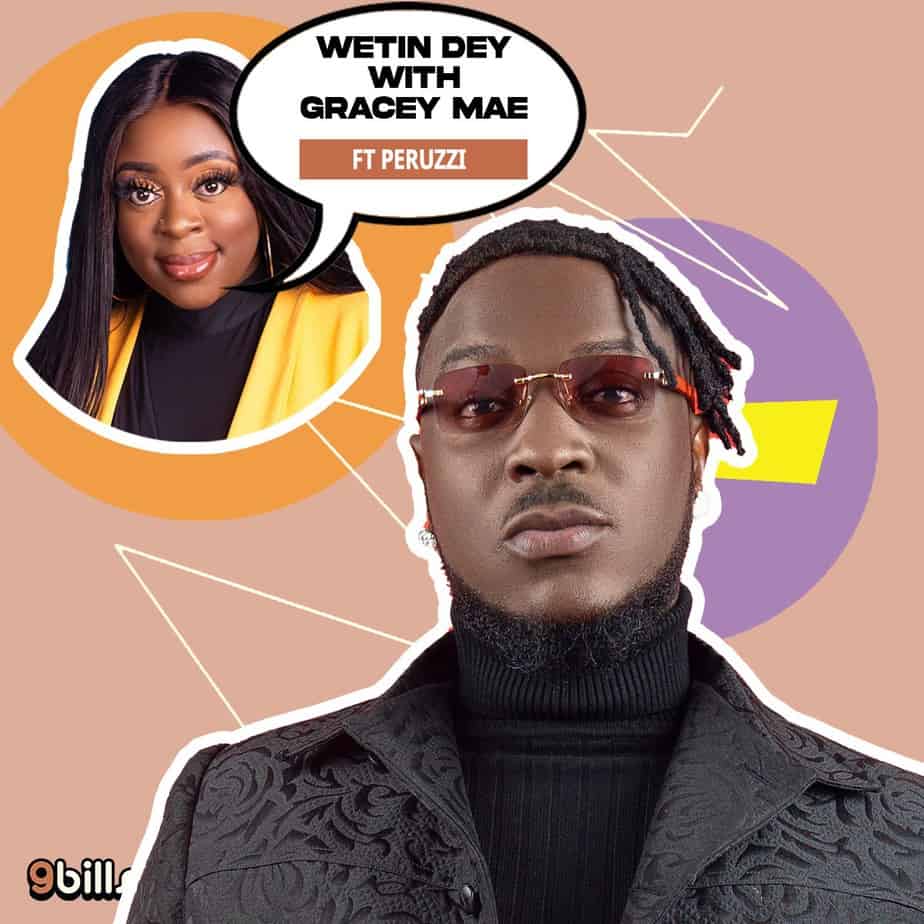 Peruzzi is a talented singer with smooth vocals and a golden pen. His reputation as one of the strongest lyricists in the game precedes him, as he’s written major hits like Davido’s ‘Fia’ and 2face’s ‘Amaka’. His talent catapulted him to the world stage once he signed with Davido’s label DMW, he’s had an incredible journey ever since. Peruzzi unpacks his latest album ‘Rum and Boogie‘, his journey so far, and more in this candid conversation with Gracey Mae.

Congratulations on your recent album ‘Rum and Boogie’. I’ve got two questions for you. Firstly, what’s your favourite type of alcohol?

Plus, what’s your favourite dance?

So not Rum and not Boogie?

Not Rum and not boogie.

So what was the inspiration for the name of the album?

First of all, I was going to put out 21 songs or so but then we cut it down and decided to make it a double album. So we selected the emotional songs and the love songs on the Rum part because you know how you feel…

When you drink rum?

Yeah. Then the up-tempo songs, the party songs, the street club bangers, we put them on the Boogie side so that you don’t feel like it’s too long. You’re able to select whatever mood you’re in, you get me? Whatever vibe you wanna tune in to.

You’ve given us a project every year over the last 4 years. This album in 2021 kinda starts with a little gospel vibe: “Let’s enter His gates with thanksgiving.” What do you want your listeners to take away from this project?

The other side of me, a different side of me. I’ve paid attention to the bodies of work I have put out, the EPs and everything. I understand that it’s time to show them [what I’m made of] ! The Boogie started from ‘Southy Love’ I understood that you guys like the different up-tempo sound, so I thought “Let’s give them up-tempo side” which is new! The normal Peruzzi would just be singing the slow type…normal Afrobeats. I decided to make it as a new/different part of me man! Let them just feel something different. Not the same! Even on the love songs, we did a lot with the lyrics as well so it’s different. It’s actually different!

With this specific project I noticed that the artwork changed and the release date changed. What caused the change in direction and the delay?

Well, I’m too stubborn [laughs] I went back and changed a lot of things. I refused to submit the album! It was ready but I felt like there was still something I needed to do that I hadn’t done. That was me giving you a double album which caters to every mood.

In ‘Southy Love’ you said, “I would catch a flight to come see you tonight.” What’s the grandest thing you’ve done for a babe?

Now you must’ve seen this trending online so I have to ask, what’s the pettiest reason you decided not to date someone?

[laughs] Yeah. I don’t take to one language [laughs] So yeah it’s accent. It has to be the accent.

Your first single dropped in July 2017, ‘For Your Pocket’. What’s the last four years been like for you?

It’s been crazy. It’s been awesome. It’s been fast. It’s been challenging as well. It’s a lot. A lot of things have happened like during this period but I’d say, what I focus on more is the growth. Like I’ve noticed my sound has obviously changed and it gets better. Every time I put out something, it gets better. So yeah, it’s a lot of things. It’s not just one experience, it’s has been good, bad, but we thank God.

Erm…I was pretty much a church boy. Went to sunday school. I have no brothers, just sisters. I’m my mum’s favourite and the last born. It was more of me just chilling really!

I’m jealous because I’m the firstborn so I can’t relate! You studied medicine right?

Both my parents are doctors! I feel the synergy. How did you tell your mum and dad that you killing the quintessential Nigerian parent’s dream; how did you tell them you were quitting medicine for music?

I had to run away first cos I knew if I told them before doing it, they would make me change my mind so I left first. Then I told them when I knew I wasn’t going back and then everything just scattered! Wahala everywhere [laughs].

[laughs] We thank God, we thank God. My mum had no problems with it anyways but my dad? Hmmm. My dad went to church on Sunday, come back and was changing it for me. “What are you still doing here?” Everything is calm now though, we thank God.

Honestly! Did you know that we’re both Igbo? What’s it like being in a Yoruba dominated industry?

First of all, I get what you’re saying but I don’t think that’s the word, “dominating.” I feel like it’s just good music that is dominating but obviously, this is Lagos. We have more Yoruba people here so it’s possible that more of them have more plugs. We have more of them doing more in the music industry because this is Lagos. I’m just here to make good music and as long as you make good music  – bruh! Lagos is just one state in one country in the whole world [laughs]. You get me? So it doesn’t really matter. When they dance the gbese, they still go and dance gwara gwara. What’s hot, is hot! It depends on what you got!

True, true. You are definitely hot. Your Spotify listeners are currently on over 291k which is crazy but the critics might still say “Peruzzi is a great writer” or “Peruzzi is great on features”. Why do you think you still have this narrative around you?

It’s funny [that] people think like this now because if check it, why would somebody be doing so many features and you feel the can’t song? Why would you know that somebody can write but you cancel me? There’s something wrong in your head. Omo! Check it now. Out of all the songs I’ve done, I don’t sing about boobs or arse. It’s difficult to get to my level without singing about all these things. I make happy songs, love songs, you get me! It’s just crazy how you can check for every song and see how much of a good song writer I am but still feel like I can’t make good music, it’s just features only. It doesn’t make sense. It’s you – you have a problem. You should go for fasting and prayer [laughs].

Everybody needs a a little fasting and prayer – we’re still in a pandemic. With that said ‘Rum and Boogie’ features Davido, Tiwa Savage, Wande Coal, Don Jazzy, Phyno, Patoranking, Fireboy DML – is there anyone left? I need to two dream UK collabs and two dream USA collabs!

UK Collabs? Definitely Stormzy and I like Shaybo. USA? Adele and maybe, Chance the Rapper.

Adele is British though…but it’s cool! One of the last tracks on your album is with an artist called Set Up. Who is he and why was it important for you to feature a rising star on your project?

I put two of them actually! Set Up and Boylexxy. Let me tell you what happened with Boylexxy. He comes to me and wants to feature me on a song. I liked the song but then we started hanging out and stuff – he started telling me his story! I got more connected to him so I was like “Guy, instead of you featuring me, I’ll put it on the album. Let’s just do this.” It’s the same thing I did with Set Up. I heard him and I was like “Guy, I’ll put you on my album.” With Set Up I know his boss; that’s Ghost – I’m actually friends with him so he put me on. He really put me on his music so it was natural to just do it. I learnt that from Olamide and YBNL…he’s put a whole generation of artists on.

To any one who hasn’t heard ‘Rum and Boogie’, how would you convince them to check it out?

This one is in its own lane. I’m just a guy in my own lane who wants to make great music. Whenever you think of Peruzzi, just believe him. He’s not dragging anything with anybody. He’s just creating great music.

If we want to find out what you’ve had for breakfast or what your favourite selfie angle is, where can we find you online?

My Snapchat is TCPeruzzi? My Insta is @peruzzi_vibes and Twitter is @Peruzzi. I don’t know my Facebook [laughs].

Alright, last question then, what does Peruzzi even mean?

It’s the name of an Italian goalkeeper. I used to be a goalie in high school and my friends just gave me the name. Nothing that serious! Just a goalie.

That wraps up your 9 Bills interview. Thank you so much for joining me!