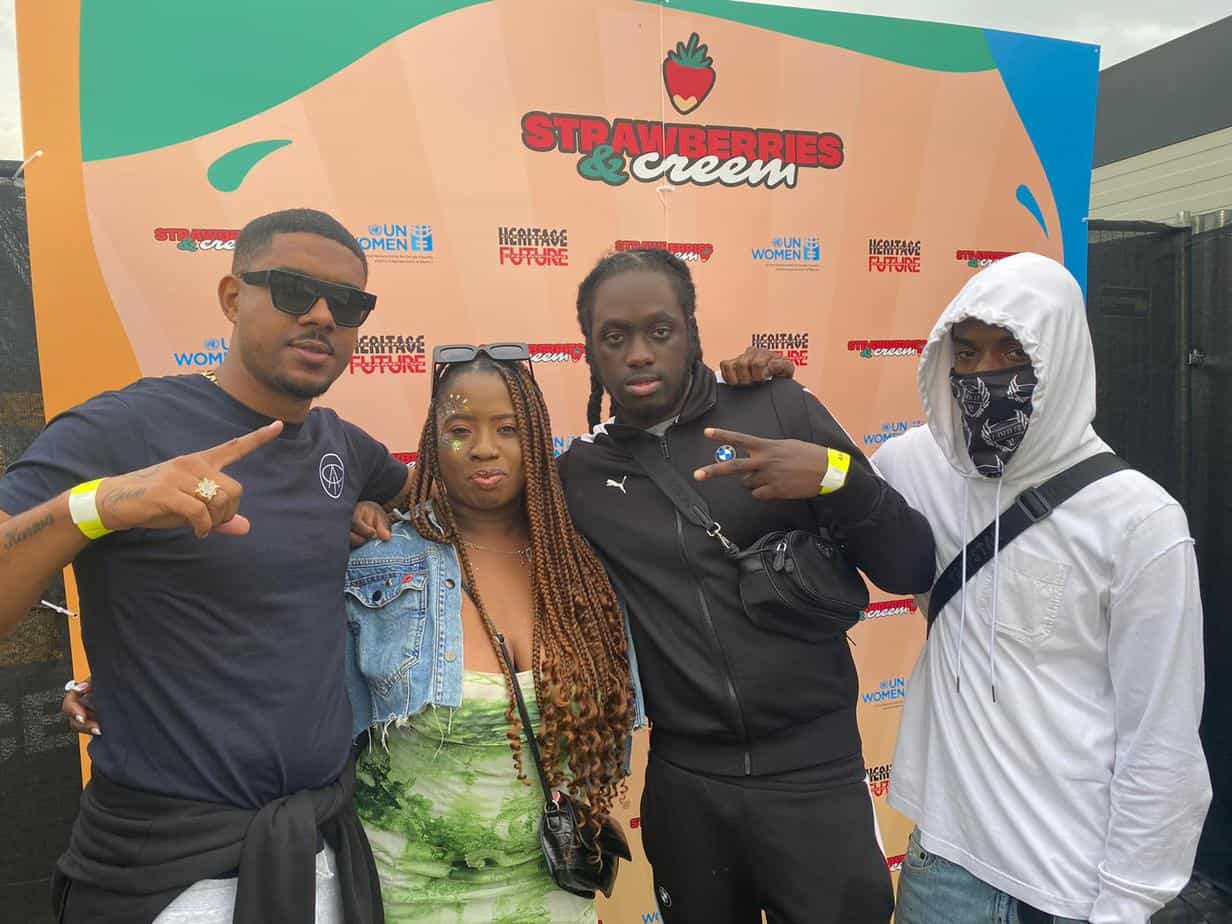 Strawberries and Creem had an epic line up this year and a very lively crowd. With the likes of Burna Boy, Little Simz, Koffee and Giggs headlining the Cambridge based festival, there was no question it would be a weekend to remember. Founded in 2014 by Chris Jammer and few of his Cambridge based peers, the festival has come a long way from originally being a one-day event. Fast forward to the present day and Childerley Orchard was filled with over 20,000 excited music fans.

For those who couldn’t make it, let me set the scene for you on the Sunday I attended. As soon as you enter there’s guys on stilts, Girls can’t DJ with Clark’s Originals and a variety of places to eat from Turkish to Caribbean delicacies. Girls can’t DJ also hosted a takeover, paying homage to Nottinghill carnival, as once again attendees missed out due to the pandemic. Hosting music charities like Girls can’t DJ, Amplify’s Strawberries and Creem pledge to support female talent, this was clearly seen as 50% of the acts were female artist.

So, what else was happening may you ask? Well, I would say the main stage was the place to be especially as Captial Xtra’s Yinka hosted throughout the day as well as some of the biggest acts graced the stage. Tiffany Calver gave a show stopping DJ set while playing some amazing tracks to get the crowd going. Abra cadabra gave us nostalgia when he performed ‘Dun Talking’, Mirra Ma brought out Coltrane, Saint as well as Wstrn’s Louis and Halie to perform an array of tracks including ‘Say Yeah’ and ‘Lemme Talk’.

As it’s WSTRN season it was only right to catch the West London trio for a quick conversation backstage. Fans should expect new music from the group both collaboratively and individually so you should keep your eyes and ears open for that. Louis and Halie spoke on how delighted they were to be reunited with Akelle and how their union is now stronger than ever. As I said it’s WSTRN season so expect more music videos, collaborations and potentially some live shows.

After a few cheeky Nando’s backstage and some Hennessy’s later, the sun began to set, and it was time for the main acts. Little Simz, Bugzy Malone and Giggs, Little Simz put on a show to remember, performing tracks like ‘101 FM’ and ‘Selfish’, as well as a variety of songs from her latest album ‘Sometimes I Might Be Introvert’.

The main attraction of the whole day was South London’s very own Giggs, we brought every single festival go-oer to the main stage. Hollow man himself performed track’s ‘Whipping Excursion’, ‘London Town’ and ‘Lock Doh’. I won’t lie though when Giggs performed ‘KMT’, I really did think Drake was miraculously going to appear on stage as I know he was recently in the UK. Although Drizzy didn’t come out, without a doubt Giggs put on an amazing closing performance. It was also unfortunate that I didn’t get to see Giggs perform the national anthem ‘Talkin’ The Hardest’ as I had to get the last train home.

Live Music, chatting to WSTRN and practically an unlimited stream of free Nando’s backstage, Strawberries & Creem understood the assignment in being the last official festival of summer. Although it was so far from my London residence I would do it all again next year!