Wireless festival 2018 was one of the most sought after events of the year and had the largest buzz for many. Tickets sold out in less than 48 hours despite being released months in advance.

Headliners were announced with Dj Khaled and Friends bringing an extra excitement and anticipation for the lucky people who managed to get tickets.

⚠️ Wireless is SOLD OUT. Do not buy secondary tickets from unofficial sources. The only official resale partner is Seatwave. No e-tickets have been sold for this event, any e-tickets you print out will not be valid for entry. ⚠️

With that level of demand resell prices were sky rocketing and there were wannabe festival goers willing to pay 5x face value!

But things went down hill from here. Cardi B announced her pregnancy, a social uproar due to the lack of female performers & later in the year J Hus was arrested and announced he would not be performing either. On top of this England had managed to exceed the country’s expectations and made it to the World Cup quater final to be played right in the middle of Wireless Festival Saturday’s performances.

Chaos for the organisers.

With a lot of shuffling and accommodating for these unexpected changes the show was due to go on but not without a gush of people selling their tickets but this time, not for profit!

Day 1 and 2 came and went of the 3 day festivities with much of the hype being around who wasn’t coming rather than who was. On top of this, England had won so who cares about anything other than “its coming home”.

Day 3. Headline artist DJ Khaled is on social media a bit too relaxed… in Mexico!

Wait DJ Khaled ? Lol my man is doing “mana cool mana ease” in a pool on holiday 4h ago and wireless is today 😂 #WirelessFestival pic.twitter.com/7rn3bjWOs2

Due to a scheduling conflict related to filming of the The Four, DJ Khaled was not able to commit to perform at Wireless Festival. Although we have known for a few months and tried to make it work, it wasn’t possible.

I’m suing Wireless for false advertisement. There’s no Cardi B, J Hus, Fredo or Dj Khaled. What kind of event management is that?????

On the app the headline act was listed as TBA but there were rumours that Drake would take over but that can’t be true. Why would he? How much money would you need to pay to get drake to headline your already sold out festival with 24 hours notice? Too much. Surely.

8pm on the final day of Wireless Festival 2018 and Giggs comes on. The crowd are feeling it but there is an earring anxiety and apprehension around the crowd. Giggs drops hit after hit and brings out Santan dave, Sneakbo and Mr Eazi. Then…

Drake comes out and rings off tracks from his new album scorpion which had just reached 1 billion streams! He says “My brother Giggs told me to come so I’m here as long as he want me to be…”

Giggs did this! Giggs and Drake on stage and all the previous mishaps are forgotten. England are playing a semi final in a few days but that’s not important right now! 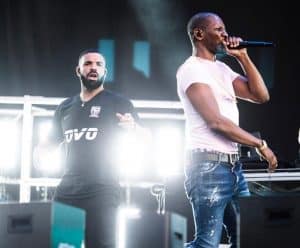 Although it was never officially announced, Drake headlines Wireless Festival 2018 and basically said he only did it for Giggs!

This came just a day after Drake dropped a ‘behind barz’ on Link Up tv. In the clip he acknowledges Giggs influence in making this momentous freestyle a possibility.

Well done to the Wireless team for pulling this off and more importantly thanks to Giggs for saving the day!

In this article:Drake, Giggs, Wireless festival