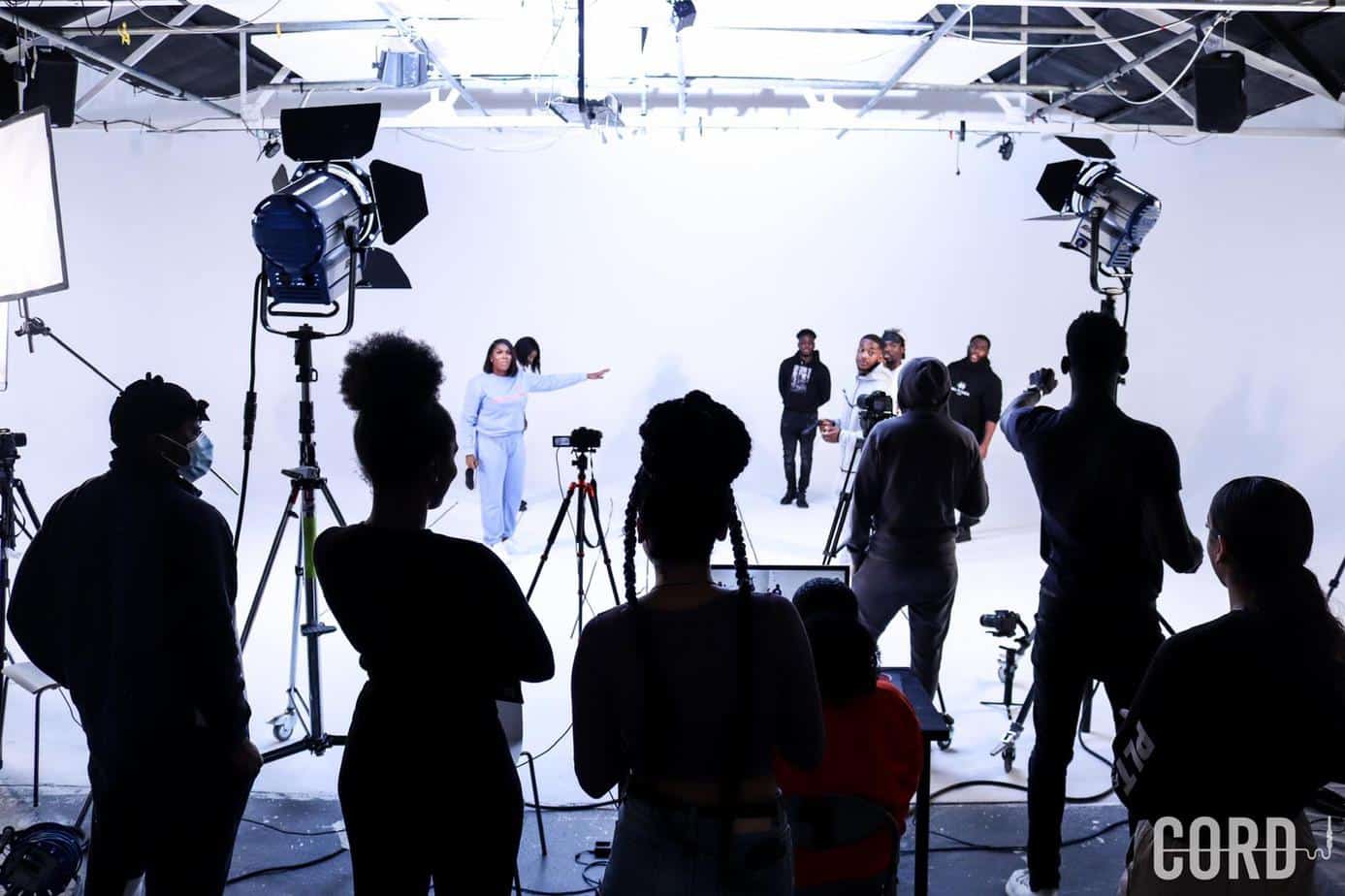 With rising popularity that has been sparked across a variety of social media outlets, and having been championed from the likes of Mixtape Madness, 9bills and Linkup TV, CORD is a fresh music discussion platform that is designed FOR the culture BY the culture – with the aim of tapping into a variety of talks related to music. The content featured on the CORD YouTube, Instagram and Twitter pages include; ‘All Fans’ episodes, ‘Playlist’ Episodes and ‘100 Fans’ episodes – all of which allow passionate music listeners to participate in giving their take on a particular genre/artist.

So, who are the faces behind who are inspiring heated music discussions we’re seeing circulating on our timelines today? – Meet Jesse and Daniel, the creators of CORD!

First of all, introduce yourselves. Name/age/where you’re from.

What inspired the creation of CORD?

D: I guess it bore down to 2 guys who loved the UK scene but felt like something was missing . We didn’t really have anything where people could just see fans just speak on the music scene and get consistent takes on their favourite musicians.

D: –Quotes Nafe/Huncho– It’s a new age. I feel like the response…even I’ve personally received about what we’re doing … is that people understand it’s kinda necessary for the culture. We’re entertaining, informing and educating.

D: Say in America, if someone wanted to find out something Stormzy, they’ll check out our Stormzy all fans

J: Then they’ll watch the Stormzy playlist and go on to find some of his music to listen to. They could watch the Chip video and then think ‘Chip is a barer…Chip is a bit of a legend’

What influenced the set up for your takes?

J:  I’d say it’s a variation of YT broadcast companies. Like a mix of Jubilee, Grape Vine, All Death digital, CUT. There’s so many vids we must have watched on YT where we though ‘oh I like the set…I like the cast and how they’ve done this x,y and z’

I would even say Link Up TV Originals, some of their original content was definitely inspiring in a sense of ‘what did we like about that and how can we include it how can we put a CORD twist on it?’

Like we watch EVERYTHING. All of the content out there on the scene, has kinda influenced us in the sense of “how can we do this for our specific audience to create something they enjoy’.

D: Essentially those platforms are all about innovation because a lot of the things that we’re trying to do is related to invoking some sort of emotion from the first ten seconds of when someone watches our videos. We gained a bit of inspiration from Listening Party.

So yeah, the good thing about those platforms is that they have those ideas and we’re trying to just draw inspiration from them, adapt and turn them into our own

What makes CORD Unique from any other music discussion platforms that are upcoming in the UK?

D:  In terms of the types of platforms available which touch on the weekly release of music, podcasts were probably the only ones in the UK that did this. The vision is mad; we wanna do it justice. We’re from the culture, we’re a part of the culture and we’re trying to bring this personal perspective to the culture because it’s a bit more reliable.

J: With CORD, this is just the BEGINNING. This is just ½ of phase one. This isn’t just funzies, and you know what I think separates us? The fact that there’s genuine love and dedication to the music. It’s for us, by us.CORD is an abbreviation for Culture Over Record Deals – and that just means authenticity over everything.

D: Yeah CORD is Culture Over Record Deals. We might bang on about the ‘culture’ but I’m saying what I’m saying only because I’m a representation of Culture Over Record Deals. We live by that every time we’re talking about the culture – which may sound like a cliché. But with this generation, when you take a look at what’s happening across the scene…the culture is powerful. We also want to remove and change the way people perceive their favourite artists and just be like “I’m a stan! I love this artist!”

D: Yeah removing the politics and focus on the music alone.

Out of all the episodes recorded to date, which one has been the most heated to witness on set?

D: Oh Stormzy – without a shadow of a doubt.

J: That was just smoke upon smoke. Me and Daniel were running around the studio thinking ‘what the hell are we hearing right now?!’

J: Like you know them ones when you need a chair to fall off. No filter man, no filter.

D: No for real, everyone was just going mad. Everyone just went crazy – some of the opening statements were a bit wild. Like as soon as we heard that we were just thinking ‘alright then’. Big up MK for that!

As well as doing ‘all fans’ series on UK artists can we expect to see future discussions involving US artists?

J: Just tell ‘em it’s coming. The culture is bigger than the UK and hip-hop. The UK is our main mission, but for sure – we saw the love Roddy rich got on the come up.

D: Yeah it’s coming, but we need to complete the UK first. Bruh imagine doing a Drake all fans – the Drake all fans would be BRAZY. Nah, it’s deffo coming

So we can definitely expect a Drake all fans yeah?

What other concepts are you looking to apply to the creation of your content?

J: Do we wanna give away the sauce?

D: Events will be a big part of what we end up doing.

J: Yeah live shoots. Curated, live music shows with a mixture of upcoming and established artists, that’s the good thing about CORD – we’re discovering a bit of both. – You see what we did when you came to one of our shoots? We wanna do a live version, where we have people come through. Similar to how TV shows have a live studio audience.

A season 2 with a few tweaks, basically building on what you’ve already done?

Both: Yeah but more.

Have you guys set any future targets that you wish to achieve as your progress through your journey with Cord? I.E a televised show

D: Like I said, there’s a lot. I think the general aim is for us to be the hub for music discussions in the UK. So say if someone’s album has come out, they’re coming to CORD to check what content has been released on that. If a new artist, is coming to the scene – people will come to CORD to see which artists are about to blow up. We want to be the hub for all things UK music.

J: We’re for the people as well. Like five years ago, when I was a uni I would have loved to come to a CORD shoot, be a part of it and kind of just establish a rotation of people. If you love music, you love talking about music then that’s what we want to see on  CORD. It’s not about having specific people, we just wanna have people that love the music. Same way you reached out to us and we thought ‘why not? Come through.’

It’s clear from this interview spread, that both Jesse and Daniel have the right idea in terms of the cultural impact they want CORD to make, and having worked with them myself – I know both are true to the values they hold as creatives, and are hard working content creators.

CORD’s recent release is a ‘Behind The Hit’s‘ producer’s round table episode. The purpose behind it was to create an intimate setting and unite some of the UK’s biggest producers so they could share their experiences from working in such a competitive yet thriving industry. The cast members who will make an appearance include M1onthebeat, X10beats, AvTheProducer, JBMadeit, Dr Vades, and 169 – the number of credits present ranging from; Drake, Dave, Headie, Burna Boy to Digga D, and more.

Part 2 will be released on Sunday 13th December, so make sure you’re subscribed to their channel; following their pages and have your post notification turned on!