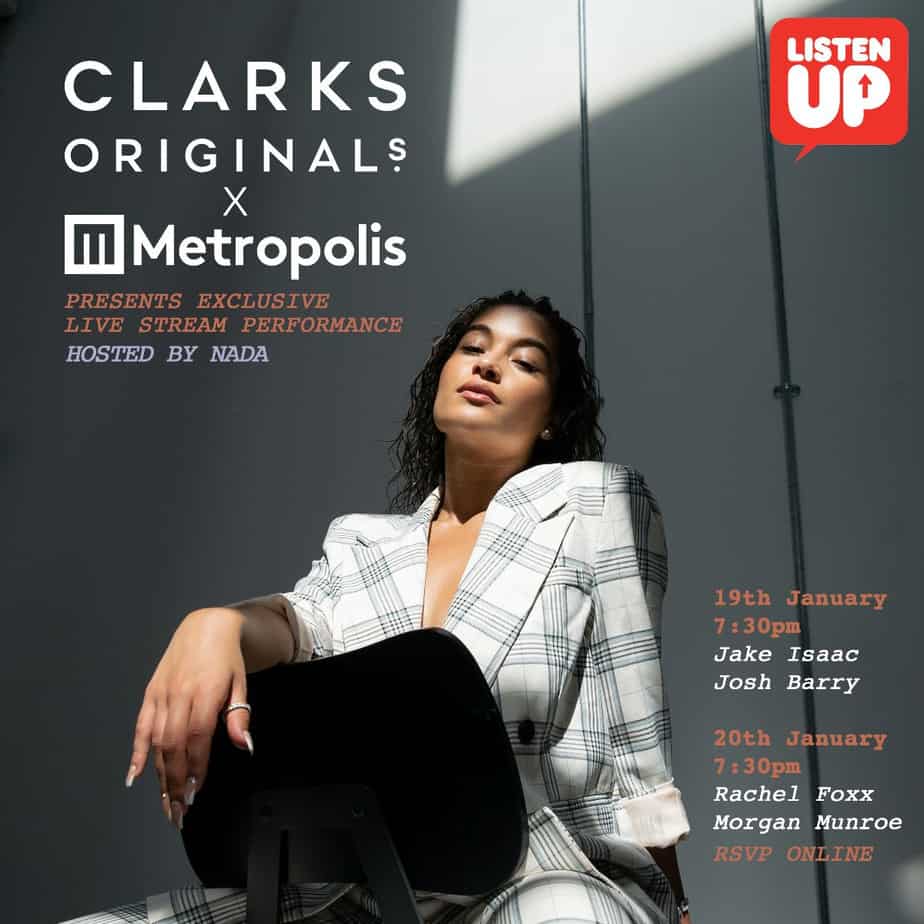 The renowned Metropolis Studios are teaming up with shoe-wear brand Clarks Originals to bring us a two-day exclusive live stream series, in association with Listen Up, booting off 2021 in the best way possible.

With a roster of outstanding London based talent, including Jake Isaac, Josh Barry, Rachel Foxx and Morgan Munroe, the socially distanced event will revive the nostalgia of live performances, intertwining entertainment and positivity in the way we all desperately need.

The event will be hosted by Nada, a presenter and content creator with fantastic interview credits, from the likes of Ari Lennox to Headie One and Miraa May to MC duo Krept & Konan.

Clarks Originals is a brand well-known for its connections to a wide range of musical genres, inspired by their deep-rooted history in Jamaica. Stretching from Dancehall and Reggae, to East Coast Hip-Hop, to Brit-Pop, Clarks has built relationships with legends such as Wu-Tang Clan and the Gallagher brothers.

Metropolis Studios was founded in 1989, based in the redeveloped Power House that once powered the trams in West London in 1901. The studio quickly established itself as one of the major recording studios across Europe, and happily housed some of the best mix-and-master engineers across the world. With the array of 2020 issues we faced, Metropolis Studios took it upon themselves to create and build live streaming infrastructure to offer artists and brands a platform to broadcast from, one that could handle incredibly high-quality performances and sessions.

With the combination of these two passionate platforms, the collection of featured artists boosts the levels 10x higher. Every single creative involved has a background jam-packed full of skill, experience and a deep love and respect for the industry.

Jake Issac, an artist with a full back-catalogue of EP’s and an album, has secured over 70 million streams, performed at Glastonbury and networked with Sir Elton John, Paloma Faith, Duffy and more with ease. Last year bought him the opportunity where he was invited onto Stephen Colbert’s Late Show to perform his single ‘New York’, coupled with dropping other songs such as ‘Good’ and ‘Remember’ without any delay. These tracks featured artists Tertia May, Samm Henshaw and Mumu Fresh.

The soulful and charismatic Josh Barry is a vocalist who has dominated the dance-music scene. From touring the UK with Rag N Bone Man, to being the front man and lead singer of Gorgan City across all of their live shows since 2014, Josh is no stranger to bright lights. He has been welcomed on the worlds most beloved festivals and stages, such as Coachella, SXSW, Glastonbury and many more. His collaborations with the likes of SG Lewis, Sonny Fodera and Friction have only reinstated his top-tier status and proven his appetite for his work.

Rachel Foxx is another artist who is breaking down barriers in the industry, one who has received support from OG’s such as Diplo, Snoop Dogg and Sir Elton John. Foxx had no issue with selling out her own headline show at Camden Assembly, and has worked alongside Ms Lauryn Hill, Kelis and Joey Bada$$ on their various tours. Rachel dropped her latest EP ‘Fluorescent’ last year, which featured singles ‘Progress’ and ‘What You Need’.

Leicester born-and-bred rising star Morgan Munroe may seem to be a relaxed cool-cat, but her confidence oozes from every lyric. Munroe is on the path to becoming a UK Soul legend, an aspect which is easily proven from the first time the world heard her on Kamakaze’s song ‘Last Night’, a track that has amassed over 4 million streams and was featured on the FIFA 20 soundtrack.

The Deets You Need:

The celebration of live music from Clarks Originals x Metropolis Studios is a live stream series that you will not want to miss.

The 2-date event will run across the 19th and 20th of January, giving us all the evening motives we have been missing in our lives.