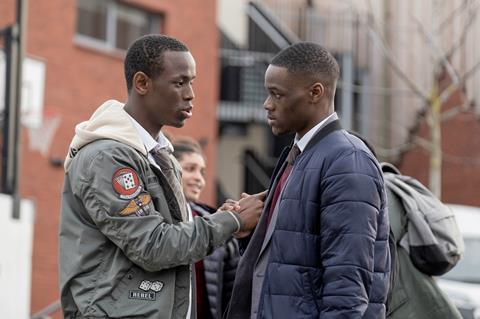 Suspenseful, thrilling and action packed. Blue Story illustrates a tale the streets of London know too well as longtime friends become enemies as a result of post code feuds, that continue to terrorise the streets of London today, based on a true story set in South East London about the well known gang rivalry between Peckham’s ‘Pecknarm’ gang and Lewisham’s ‘Ghetto Boys’ which occurred in the early 2000s.

Top Boy’s Michael Ward as ‘Marko’ and Stephen Odubola as ‘Timmy’ execute both passionate as well as suspenseful performances as they go from the best of friends to mortal enemies. Timmy joins the ghetto boys gang to seek revenge for Marko killing the love of his life ‘Leah’ played by Karla Simmons, who’s death touched the hearts of us viewers.

Rapman is able to use his lyrical prowess to impress the key turning points of the movie upon the viewers, as he conveys the clear message of London’s gang culture having a detrimental effect on the youth of today. As the film seeks to give an insight and not glorify the events taking place in London’s streets.

The film effectively displays how a number of people are effected by the actions of gang violence in the inner city, both physically and mentally. Through examples such as Marko not being able to go to Timmy’s area due to his brother’s heavy gang affiliation, Marko’s older brother suffering from paralysis then consequently committing suicide due to his mental depression as well as South East London being terrorised by the gangs war.

Now up to £3.7m, @RealRapman's 'Blue Story' has held a top 5 spot at the box office for three consecutive weeks.

Today it will become the highest-grossing film of its genre.

Using relevant themes such as drilll music and social media pages reposting attacks of gang warfare to drive the authenticity of the film. This further impresses the message to viewers who may not be aware and educated on the happenings within the lower income estates and gang ridden areas of London.

Blue story is a great piece of cinematography, particularly the ending of the film which is heart wrenching and powerful as it is a twist on the original blue story Rapman originally posted on SBTV.

As with any art, there will be differences in opinion.

To evryone that saying blu story is a great movie. I wanna know your reasons why

Coz I was expecting more. A lot more. It was more like a love story in the hood than a representation of growing up in the hood, For me anyway. It had the message that no one wins but there’s alot more to these streets… Honestly When it ended I didn’t even know what to think.

What did you think of Blue Story? Join our poll on Twitter.

What did you think of Blue Story?