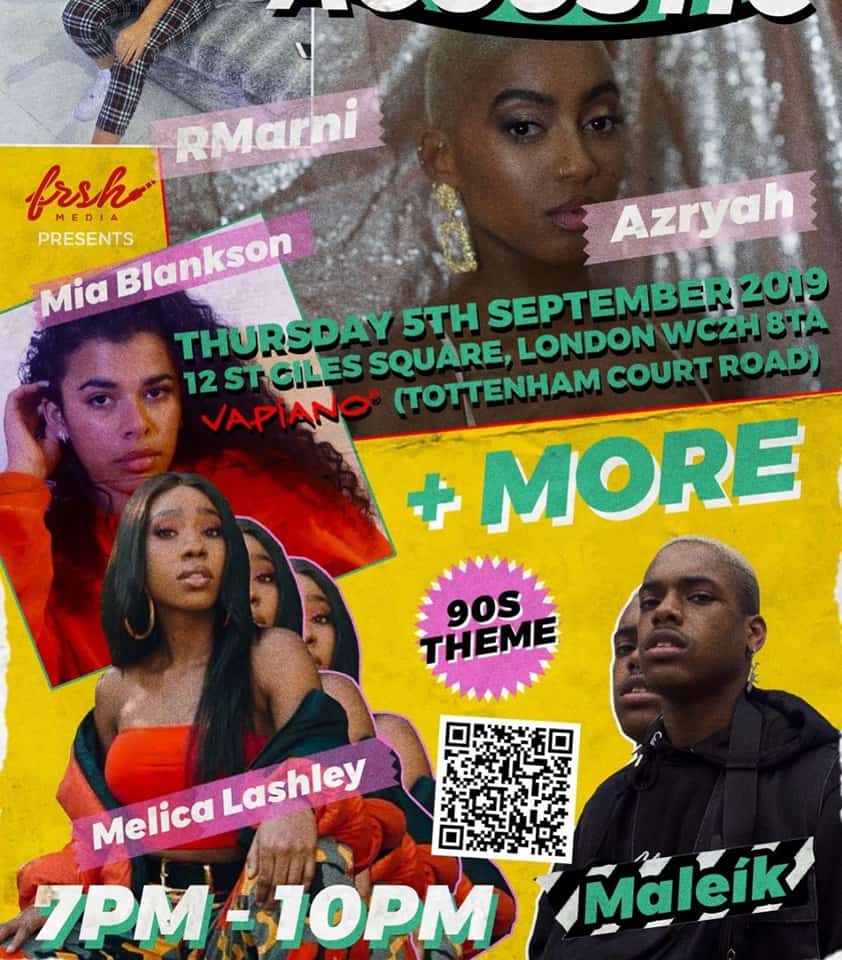 Handmade pasta, pizza and saccharine voices on a school night? Count us in!

Frsh Media invited us to a 90’s music themed acoustic session @ Vapiano’s in central London and the turn out was absolutely phenomenal. A carefully selected line-up of extremely talented underground artists only intended to entertain the top floor of the restaurant, however the music escaped through to the other floors and were thoroughly enjoyed by all. 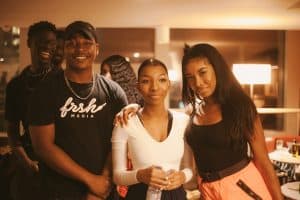 Arinze & MLavontelle, our hospitable hosts for the night guided us through the acts below. All Photo credits: @narcography

Emiko stole our hearts away with his sharp, rich and colourful tone, setting the bar high at the very start of the show. Being the first artist to take the stage, you’d expect some hints of nervousness, yet his performance was confident and he sang as if he knew his worth.
@emikomusic_ 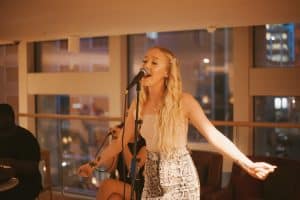 Tammie had a tough act to follow but she held her own, especially as it was her first performance in London. Her fan base has definitely expanded now. Her voice has so much character that if you closed your eyes, you would think she was an entire different person. The cherry on top was the harmony accompaniment she had, the contrast allowed you to appreciate her talent that little bit more.
@ft.tammie 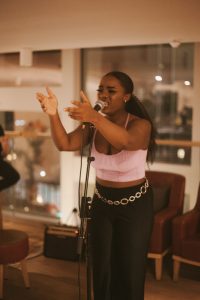 If Amy Winehouse and Adele had a lovechild, it would be Adisa. Adisa possesses a primal tone, her singing depicts all the emotions the lyrics are attempting to convey and it is refreshing to witness. She is also an excellent song writer, she performed her original song ‘Wash Away’ which we recommend you give a listen once she puts it out.
@adisaofficial_ 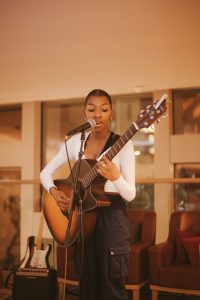 We were taken aback watching Nia sing and play the acoustic guitar at the same damn time. Nia serenaded us with every strum, whilst her sweet voice fearlesslly hit a plethora of high notes. But, what surprised us even more was the fact that she is only 16 years of age, imagine how much more incredible she will be over time.
@Niasmithy

Mia revealed to us that one of her inspirations is Jorja Smith and we can totally hear why. Mia has a similar nasal tone but sings with a lot more power coming from her diaphragm. Mia was a joy to watch particularly due to her uncontrollable feet tapping, two stepping and swaying on the spot. Although that may seem like something so basic, it is admirable to see what music does to performers. You could tell that she was feeling it, and that made us feel it too.
@miablankson 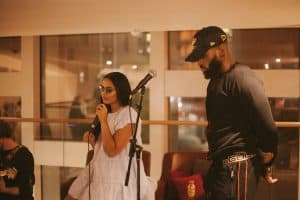 For her first performance ever in life, Rmarni did super well and was fortunate enough to have Big Tobz support her with a verse. She may have worn shades as a disguise for her shyness, however they looked like a deliberate part of her extremely cute outfit. Rmarni’s voice was light, dreamy and comforting, it gave us Jhene Aiko vibes. We hope this performance is the first of many.
@Rmani 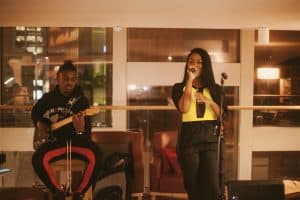 Tee had a bubbly stage presence paired with a unique, nasally enunciation and tone to her voice. Consequently, when she performed her mashup leading with Sza’s ‘The Weekend’, it was absolutely fitting. She also gave Teedra Moses ‘Be your girl’ a different sound to what we are used to which makes you appreciate her individuality. 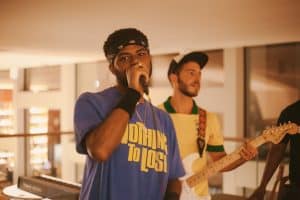 Jayo broke the mould by being the only rapper on the line up. Keeping consistent with the 90’s theme, Jayo started his set by flowing over an acoustic rendition of LL Cool J’s – Doing it. For all his chosen songs, the saxophone executed the main melody whilst the electric guitar facilitated the chords. Now the sax may have dominated the early 1900s and faded out around the 80s, but including it cleverly gave us even more of the nostalgic feel we had been feeling all night.
@jayostream 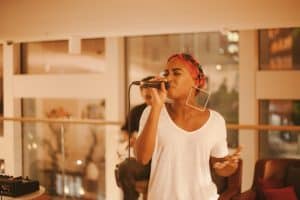 Azryah’s voice was strong and powerful despite her warning us that it would be shakier than normal before prior to commencement. Her body language illustrated that her passion ran deep, which was mimicked in her singing and she gave us more runs than Usain Bolt.
@_azryah 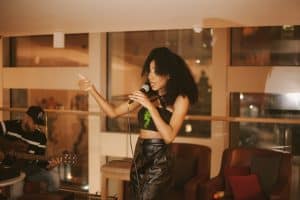 Melica came through with the diva utterances and the hair to match. Her performance was energetic, authoritative and most definitely revived the restaurant with her initial upbeat song choices. Melica also performed an acoustic version of her original called ‘Marco Polo’ which was captivating, check it out.
@iammelica_ 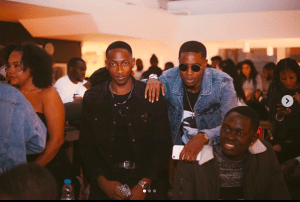 T Vocalz’s performance was astonishing. He started off calm and all of a sudden he belted out the most alluring sequence of notes. Also supported by the talented pianist Samuel Jinadu, King Damari took over the set with an equally charming performance that melted everyone’s hearts. Now don’t get us started on when they both joined forces and performed together, the harmonic synergy was insane.
@t.vocalz @king_damari1 @samuel_jinadu 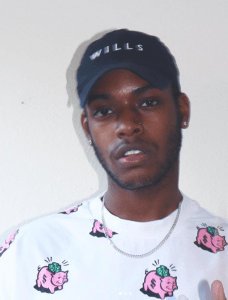 You could have literally felt how soft Maleik’s voice was, it faded away into the clouds he created when he sang in the higher octave. His performance felt extremely calming, similar to playing slow music on a summer’s night for the journey home, perfect for the the second to last act.
@Maleikfitz 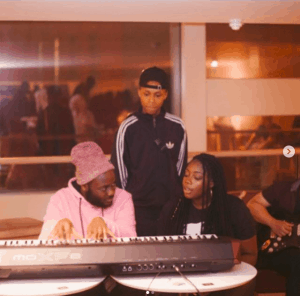 Essy kept the same energy maintaining that delicate, velvety vibe. She could have put us to sleep (in a good way). Her warm and full voice made her rendition of Monica’s ‘So Gone’ incredibly mesmerising.
@Essymaliya

A humongous shout out to all the instrumentalists who supported the named artists as they were equally as talented. Instrumentalists do not get the recognition they deserve being artists themselves, they’re only using a different medium!

We look forward to the next show Frsh Media puts on, these events and their Instagram page combined can put you on to some seriously good artist.