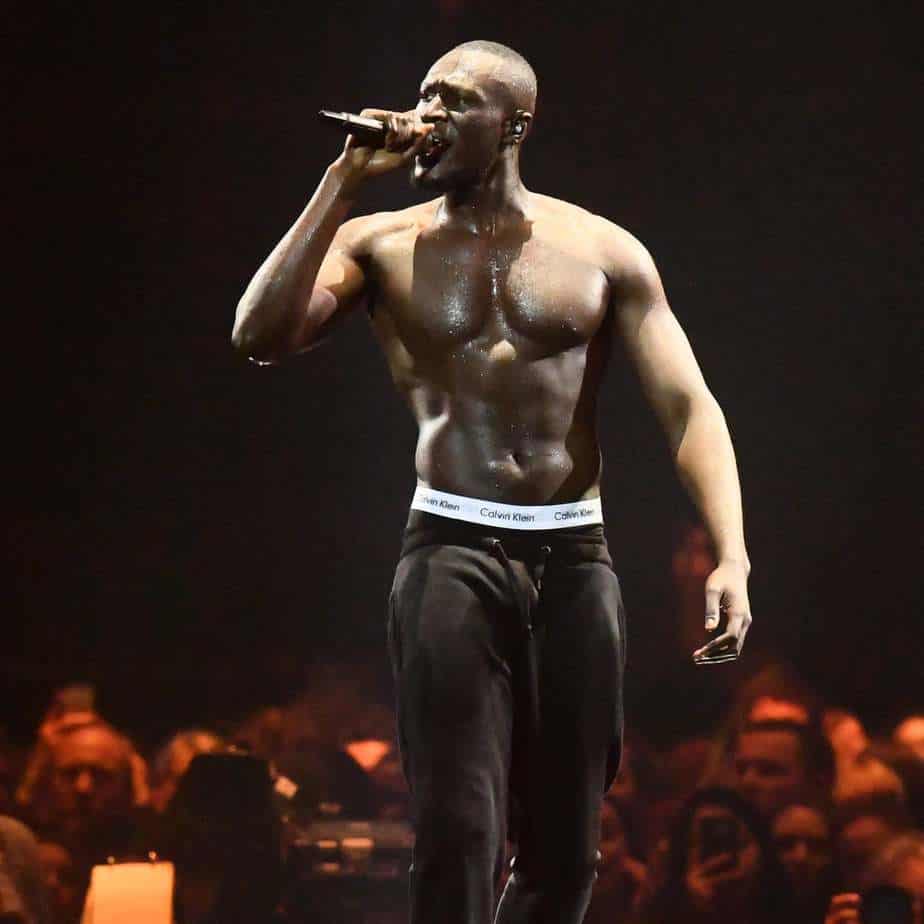 Stormzy is arguably the biggest UK rapper of our generation. Two number one albums, platinum singles and millions of fans across the world. His humble and charming persona resonates to fans across many generations, from teens to even older fans who have taken to the rapper for the things he continually does for the community.

Stormzy is seen as a key role model and a blueprint of success for all artists aspiring to reach the levels he has and beyond. He isn’t your average rapper, he’s not afraid to tap into different lanes to build his brand. In this article, we will be looking at 9 things only Stormzy would do. Let’s delve into it!

1. Wear a bullet proof vest designed by Banksy to Glastonbury

In 2019, Stormzy became the first black British solo artist to headline Glastonbury in its 49 year history! This is a humungous achievement for a UK rapper that came up from the grime scene. To commemorate this high profile event, he had to do something iconic – and he delivered. Stormzy collaborated with Banksy, the most prominent street artist the world has ever seen, who designed a Union Jack stab-proof vest which he wore during his set.

This vest was worn as a stand on Britain’s knife-crime crisis and racial inequality within the criminal justice system, a hard-pressing issue that Stormzy continuously speaks on. This goes to show that Stormzy will never shy away from using his position or platforms to draw the public’s attention to issues that needs to be resolved.

2. Rent out Thorpe Park for his birthday

Imagine having the whole of Thorpe Park to yourself and your friends on your birthday? Well, this is exactly what Stormzy did for his 23rd AND his 28th birthday. Many rappers, influencers and bloggers from the UK got an invite to attend Stormzy’s birthday bash and it looked like an event that you couldn’t afford to miss.

The rapper made sure that everyone invited was well looked after as he ordered a Mcdonalds food truck (Nando’s the other year) and an unlimited supply of drinks and alcohol. The rides were free, there were an array of photo booths available for his guests to take pictures, and of course, there was enough birthday cake to go round. Let’s hope the 9bills invite doesn’t get lost in the post for the next big Stormzy birthday bash.

In 2018, Stormzy announced #Merky Books in partnership with Penguin Random House, dedicated to publishing the best fiction, non-fiction and poetry, two to three titles per year by a new generation of voices. Stormzy led the publication himself with his first book titled ‘Rise Up’. This initiative will definitely put Stormzy in the history books, we have never seen anything like this from a UK rapper.

“We’ve created #Merky Books for many reasons, the first simply for it to be a reference point for young talented writers to say “I can be an author” and for that to be a feasible and realistic achievement.”

#Merky Books took things a step further when they acquired the autobiography of Malorie Blackman, novelist and former child laureate. She is most famously known for her ‘Noughts and Crosses’ novels which was later adapted into a TV series, premiered on BBC in 2020 where Stormzy himself had a role! The author’s memoir is set to be published in 2022 and will begin with Blackman’s childhood in south London.

2018 also saw Stormzy take the educational sector by surprise as he announced that he will fund two Black British students to go to the University of Cambridge. He stressed the importance of black students being made aware that it can 100% be an option to attend a university of this calibre. The significance of this scholarship came at a time when Cambridge were openly criticised for not admitting many pupils from BAME backgrounds. In June of this year, the university itself reached out and requested help from schools and parents to increase the amount of black students it enrols.

July 2021, Stormzy took things a step further by pledging to support a further 30 black students studying at Cambridge University. Each student will receive a £20,000 annual scholarship which will cover tuition fees and maintenance costs for 10 students each year over the next 3 years. This scholarship has a had a positive knock on effect on black students as it has been reported that there has been a rise in the number of black applicants and those being admitted to the University – it’s being dubbed the “Stormzy effect”.

The most prolific artists use almost every major social media platform as a method of promoting new music, interacting with fans, flaunting their lifestyle and adding their two-pence. Social media is an essential tool to stay relevant in today’s world, yet in 2020, Stormzy packed it all in.

This move sparked outrage from his fans who were curious to know what happened and why he had just disappeared. Despite the rapper deleting all his accounts, this did not have a negative impact on his stature. In fact, he benefited from it as it made him more sought after as there was an added mystery towards his image. Stormzy is still a hot topic on Twitter and Instagram, especially when he is spotted out and about or performing.

In September, singer Billie Eilish opened up to Stormzy about her own social media struggles and Stormzy explained that he wanted to get away from the negativity from trolls and to focus on the positivity happening in real life. The rapper went on to say “The reality of being you is that you’re lit in real life. That’s what I had to remind myself. In real life, I’m lit.” I wonder if this will cause other artists to follow suit and remove themselves from the negativity of social media permanently. After all, yesterday, Jay Z created instagram and deleted it after 24 hours!

Dave ft. Stormzy – Clash is arguably one of the best songs to come out of 2021. The music video saw the two giants deliver cold bars and a catchy hook whilst flexing in Aston Martin. The video has over 22 million views after being released 3 months ago! Stormzy and Dave’s friendship is pretty strong, this can be deciphered when they perform or attend parties together.

Stormzy showed how much he valued Dave in his life when he gifted the fellow rapper with an exclusive Audemars Piguet, 1 of 1 watch. Dave’s reaction was priceless and undoubtedly meme-worthy, a wholesome moment that sent social media into a frenzy.

Who is the most likely UK rapper to get their own Madame Tussauds statue? Stormzy of course! Madame Tussauds revealed a Stormzy wax figure in August which commemorated the rappers iconic Glastonbury performance, highlighting the significant impact he has had on British culture. This figure is located in the Culture zone at Madame Tussauds London.

“From a young age, I’ve always had big dreams of who I’m trying to be in world, in culture as well.”

Stormzy is quietly building his community-based legacy behind the fuss of social media as it has been reported that he has been visiting a number of schools in the country. These visits are often a surprise to students as the rapper would turn up to their assemblies and deliver comical, but motivational talks to students, teachers and parents alike.

Stormzy’s most recently visited school was South London’s Sacred Heart, with the school taking to Twitter to sing his praises. He held four talks, Q and As, had lunch with pupils and signed books that were used as part of the curriculum. His mind-set is really focused on garnering the next generation to grow up believing they can achieve anything they put their mind to.

9. Bring back Keisha the Sket

Who remembers the infamous Keisha the Sket? This text thread took school kids by the storm when it surfaced over 10 years ago and became an urban legend in playground. Almost 16 years later, it has been announced that the story will be immortalised under Stormzy’s publishing print #Merky Books.

Jade LB, the original author of Keisha the Sket in 2005 spoke to BBC about the level of popularity that arose from her stories that went against the grain. Writing about women’s sexuality wasn’t a regular or revered thing in the early noughties, so her bravery in posting it for the public eye at the tender age of 13 should not go unnoticed.

“Keisha da sket walked so 50 shades of grey could run.”

Stormzy really has forged his own path in the music scene. A figure that has surpassed his musical roots and has now become engrained as a legacy act within British culture. A role model for younger kids and artists to look up to, if he can do it then why cant they? The US have their Jay-Z, it looks like the UK has our very own Stormzy.

While you’re here, check out our UK rap playlist on Spotify!