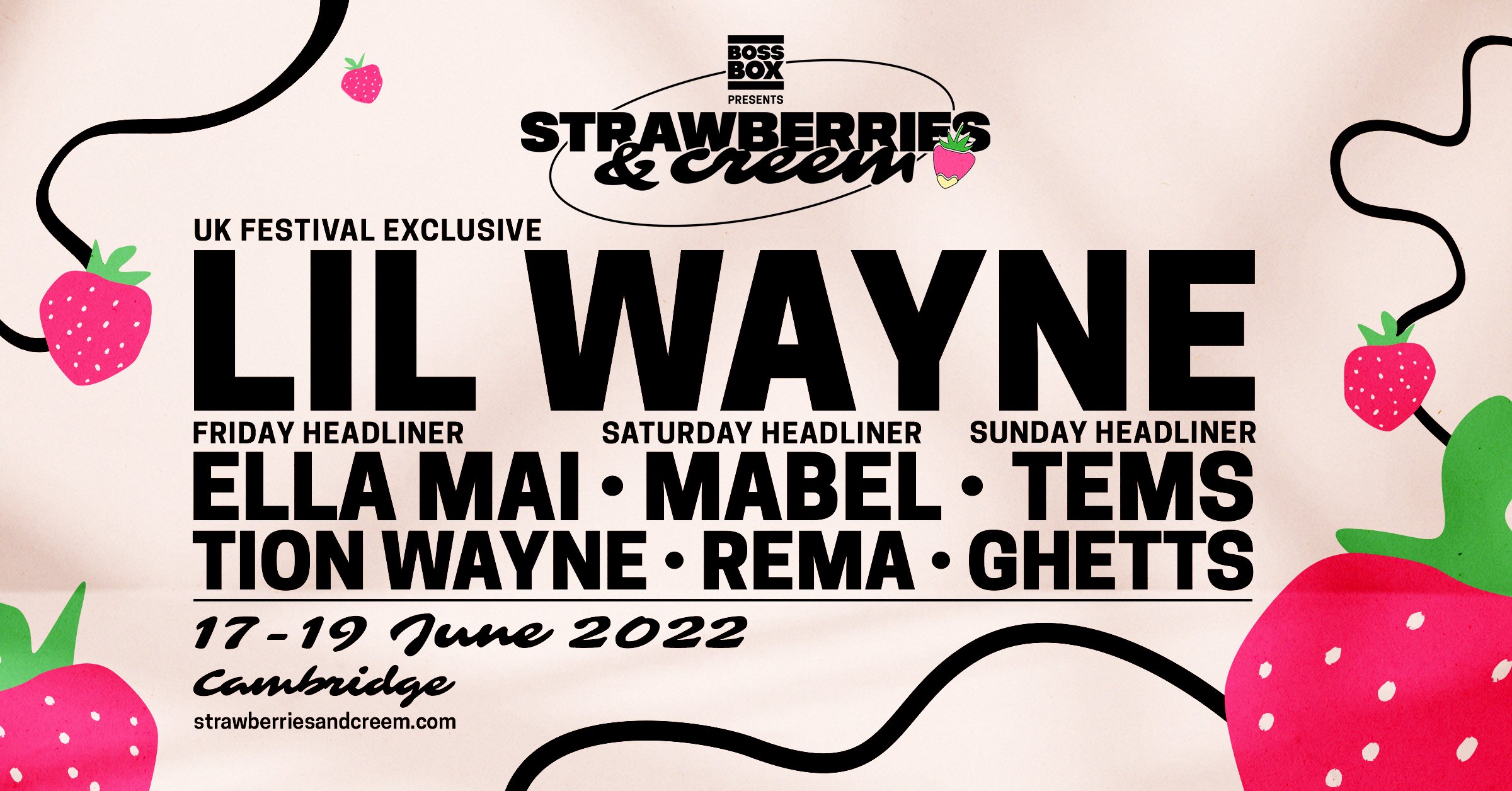 Strawberries & Creem has rapidly become one of the UK’s leading music festivals, an event that initially started off as a one-day event has now expanded to a full weekend experience. The Cambridge based festival has previously had global artists such as Burna Boy, Koffee and Sean Kingston grace their stages. Additionally, a variety of homegrown talent, from the likes of WSTRN, Young T & Bugsey, Little Simz and more.

Founders Preye Crooks and Chris Jammer have out done themselves once again with this year’s line up, so it’s only right we breakdown our 5 must see acts!

With accolades surpassing BET and Grammy awards, one of Hip Hop’s most influential rappers is making his first visit to the UK in 14 years! Lil’ Wayne has a long catalogue with collaborations from world class peers, including Drake, 2 Chainz, Swizz Beatz, Nicki Minaj and so many more. Known for timeless tracks like ‘Mrs Officer’, ‘A Milli’ and ‘She Will’ just to name a few, there will be countless ‘Young Money’ signed songs to go through, this performance is one you’d be insane to miss!

Nigerian superstar, Tems, took the world by storm in 2020 with her feature on the timeless Wizkid track ‘Essence’. Her unique sound encompasses Afrobeats, as well as R’n’B and Neo Soul. If you enjoy listening to ‘Crazy Tings’, ‘Free Mind’, ‘Found’ with Brent Faiyaz, ‘Fountains’ with Drake and more recently ‘Wait for U’ with both Drake and Future, you’d obviously want to experience her S&C festival debut!

North London rapper Tion Wayne continuously knows how to make a hit and top the charts. Since breaking through the UK music scene in 2014, Tion has had constant radio airplay, collaborated with the likes of NSG, Stormzy, Russ Millions, Davido and more. Bangers ‘Keisha & Becky’, ‘I Dunno’ and his latest star-studded album ‘Green with Envy’ have had listeners in a frenzy from clubs to their bedroom. It’s only right to see that energy on the big stage with a big like-minded crowd.

Knucks is steadily becoming a household name with his distinctive tone, particular beat selection and all-round innovative sound. Since his first ever release in 2014 with ‘Killmatic’ EP, the few shows Knucks has put on have received incredible feedback. His latest album ‘ALPHA PLACE’ has earned him his first ever UK top 5. The project features a variety of UK talent, from Stormzy to Shae Universe, we are expecting to witness some historical performances.

Bellah is best known for her sugary sweet vocals. It was her break out track ‘Evil Eye’ that really got people’s attention and even landed her a spot-on Berlin’s COLORS show. Bellah is one of the many R’n’B artists that are carving the current and future sound of the genre. With constant radio play and attention from various music outlets, she is on the right path to success, being placed on the Strawberries & Creem line-up is a testimony to that, we are excited to be a part of that history.

Are you going to the Strawberries & Creem festival this weekend? Let us know the top 5 acts you’re looking forward to!

If you aren’t attending, check out our review on last year’s one and ensure you aren’t making a mistake by being else where.